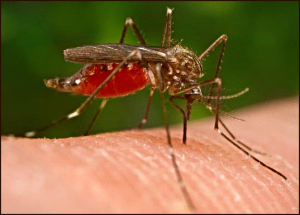 Delaware health officials have reported that a crow found in New Castle County tested positive for West Nile virus, prompting concerns about whether the state’s thriving mosquito population could transmit the virus to humans.

Mosquitoes develop in standing water — ponds, lakes, marshes, ditches, buckets, old tires — and females feed on nearby animals and humans. The proteins and iron present in blood aid egg development. Mosquito saliva causes minor inflammation (that is, mosquito bites), but, more importantly, the tiny insects are capable of carrying a number of viruses and parasites from one person to another. At least two million people, worldwide, die of mosquito-borne diseases every year.

The good news is that most humans infected by West Nile virus exhibit no symptoms. It doesn’t affect them, and they usually don’t realize they’ve been infected. However, they can transmit the virus to others, directly or indirectly. A handful of those infected, particularly children and the elderly, might experience flu-like symptoms: fatigue, sweating, fever, headache, nausea, vomiting, etc. These usually persist for about a week. A small minority of those infected — fewer than 1% — develop West Nile encephalitis. Less than 1% of total infections in the United States result in death.