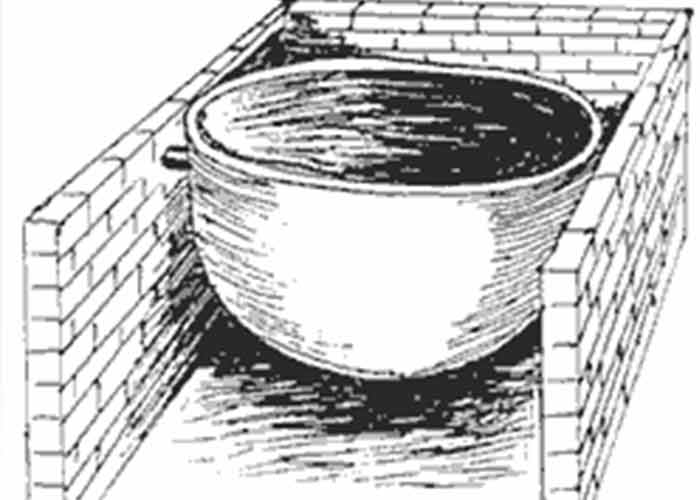 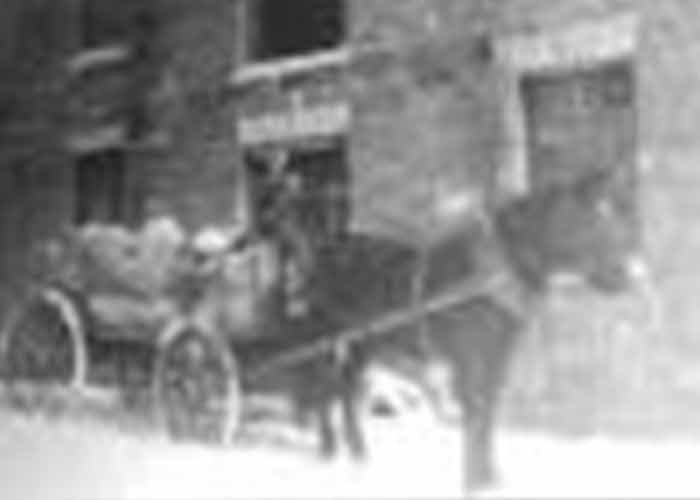 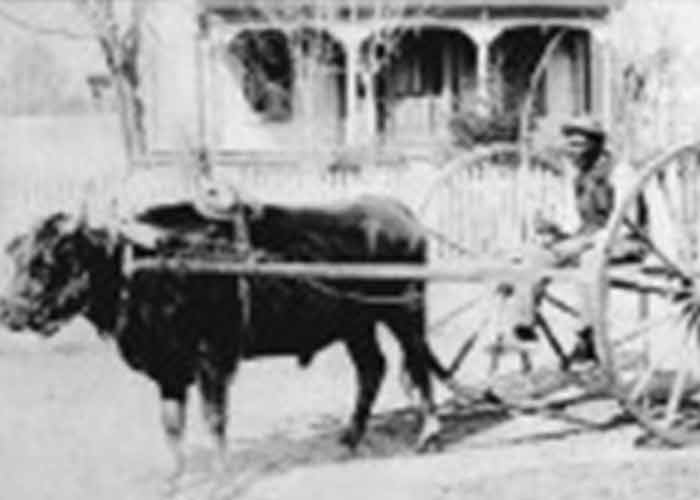 During the last quarter of the 18th century and the first half of the 19th century Fenwick Island was noted for its salt springs and for salt making or, as it was also known, mining. This activity was carried out by two young residents of the island, James and Jacob Brasure. Now on display at the Fenwick Island Lighthouse is one of the two original iron salt pots used by the Brasures. The large, semi-spherical pots had an iron pin known as a trunnion extending from each side on the order of those on old-fashioned cannons. These enabled the pots to be suspended from a framework and to be tipped from side to side. The pots were set between brick walls suspended by the trunnions as illustrated below.

The pots were filled with saltwater obtained by digging potholes in back of the sand dunes. Then, a brisk fire was built under the pots to boil away the water, leaving the salt at the bottom of the pot. This residue was placed in bins to dry. It had to be stirred frequently to keep it from caking into a hard mass. After the salt was dried sufficiently, it was put in wooden barrels or in bushel containers for shipment.

It was hauled by ox-cart (oxen being the primary beast of burden in the area at that time) to Sandy Landing on the south side of Indian River, to Millsboro at the head of the river, or in later years to the Kent County shipping town of Frederica which was served by steamboats. From those points it was shipped by boat to Philadelphia, where it was sold for two dollars per bushel or six dollars per barrel. During some periods of scarcity, such as the years during the War of 1812, Sussex County salt brought as much as three dollars per bushel. In some few instances local salt makers carried their product all the way to Philadelphia by cart.

G. Luther Bennett, Jehu Bennett, Henry J. Williams, the Stephen Ellis Family of Roxana (a few miles inland from Fenwick) and others worked at Fenwick making salt during the 1800's. Some of it was sold locally. With the passage of the years it came to be more and more of a locally consumed product as large deposits of salt were discovered elsewhere in the United States. Since it was much less laborious to mine salt from salt deposits than to boil it from salt water, the local salt makers were finally unable to compete and had to give up as their prices fell more and more.

Mr. G. Luther Bennett, Sr. made several trips to Frederica, carrying salt to be shipped to Philadelphia by boat. This was a three-day journey there and back during the mid-19th century. Sometimes the boat would arrive with a cargo of mules for Mr. Bennett. The captain of the vessel got paid for every mule that could walk off the boat without help. Mr. Bennett kept a few bushels of salt to put on the hay which was fed to the mules on their journey south. By feeding them salt, he caused them to drink lots of water, which made them look better. The mules were driven as far south as Indian Town and Snow Hill in Worcester County, Maryland. They were sold to farmers along the way. If any salt was left over from the trip, it was used to preserve meat at hog-killing time in the late fall and winter.

One of the interesting things about the salt-making process is that the water, which was boiled, was not taken directly from the ocean. The water, which collected in the potholes behind the dunes or in the shallow salt ponds which occur naturally here and there along the coast, has a higher salt content than seawater, and high salt content was the key to success. Digging potholes in the proper location, where there had been enough wash-over of the sea, was also important because areas with less wash-over would produce water with less salt content.

When potholes had been dug, the traditional means of testing the salinity of the water was to float either an egg or a potato in it. If the egg or the potato floated out of the water high enough to make a circle at the waterline as large as a nickel, then the water was right for salt making. If it floated higher, so that the circle was larger than a nickel, the salt content was too great and the salt crystals would be too coarse. If it floated lower, indicating a lower salt content, the salt would be too fine and not enough salt would be collected from the water.

Mr. Tunnell notes in his article that the water from the potholes averaged about 8.37% salt, making it three times as salty as Atlantic Ocean seawater, which is 2.79% salt. The old salt pots, also known locally as salt pans, held about 125 gallons of seawater. When the salt was boiled away, the result was about 90 pounds of salt from the 125 gallons. Mr. Tunnell checked this out mathematically, based on the salt content and the weight of a gallon of seawater, and found it to be accurate.

The salt makers who used the salt pot on display at the lighthouse apparently used only two pots in their salt-making operation, but some early salt makers are said to have used as many as five or six pots. These were all mounted together into a crude, brick enclosure with a furnace at one end and a flue at the other. Thus, it was possible with a few hours of boiling the salt water to get as much as 180 lbs. to 540 lbs. of salt. The hardest part of the process, Mr. Tunnell noted, was to haul enough fuel to the salt-making site since places appropriate for salt making had little or no wood nearby.

When the salt making was discontinued (probably about 1875), the salt pots used by the Brasures and later the Bennetts were hauled to Lewes, at the mouth of Delaware Bay, where they were used for some years for cooking fish. When Mr. G. Luther Bennett, Sr., of Roxana, learned that the pots were no longer being used, he asked if he could get one. He was told that he could and drove his horse and wagon from Roxana to Lewes to pick up the pot. Since it weighs in excess of 500 lbs., this was a long and slow return journey. Mr. Bennett and his family have used it ever since for watering their livestock, until George L. Bennett, III donated it to the Friends of the Fenwick Island Lighthouse on May 1, 1986.

We are grateful to Mr. and Mrs. G. L. Bennett, III for bringing the original salt pot back home to Fenwick Island. It can be seen inside the lighthouse fence at any time.

*(This information is contained in the most informative article, The Salt Business in Early Sussex County, Delaware History, Vol. IV, No. 1 (March, 1950) by James J. Tunnell, Jr. Delaware History is the journal of the Historical Society of Delaware. Mr. Tunnell was descended from Jehu Bennett.)