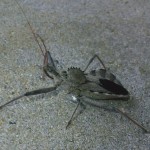 With the cooler weather that accompanies the final weeks of summer on Delmarva comes a rather unusual visitor: the wheel bug.

The gray-brown wheel bug reaches up to 1.5 inches in length, and is easily identified by its dorsal armor, which is shaped like a wheel or cog. It can fly, and is often mistaken for a grasshopper; listen for a low, buzzing sound.

The wheel bug uses its beak to pierce its prey and inject a potent saliva, which paralyzes the unfortunate victim and dissolves its insides. The wheel bug then drains its bodily fluids (not unlike a spider). It is willing to feed on caterpillars, webworms, cabbageworms, Japanese beetles, other insects, and even fellow wheel bugs.

For humans, a wheel bug bite is extremely painful — some say more painful than the sting of a hornet — and can leave a scar. It is best not to handle them.

Unlike many insects, the wheel bug is not flighty; attempts to remove it from a particular location (like an interior wall) often only prompt it to crawl along, though it will fly for a short distance if sufficiently harrassed.

Wheel bugs reproduce during the fall. The female lays approximately 40-180 brown cylindrical eggs on a tree twig, and if they survive the winter, they hatch in the spring and the tiny red nymphs reach their adult stage in the summer.

As far as control goes, wheel bugs are usually considered to be beneficial because they prey on plant pests, and only rarely are they found in enough numbers to become a nuisance.