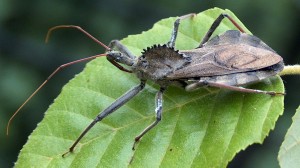 Few people have ever heard of the wheel bug, though it’s fairly common on Delmarva. It is large, about 1.5 inches long, but is well-camouflaged, being a dark gray or brown in color. And, though it flies, you might mistake it for a grasshopper as it buzzes by. If you spot one resting, you’ll notice the distinctive spoked half-wheel on its back, which is a form of protective armor.

The wheel bug is a beneficial insect. It preys on other pests, like Japanese beetles or caterpillars, feeding on their insides in a rather gruesome fashion. When the wheel bug catches a meal, it pins it down with its front legs, and then pierces the exoskeleton with its beak, injecting an enzyme that dissolves soft tissue so that it can be slurped up. This is similar to a spider’s way of feeding.

“Beneficial” does not mean “harmless.” The wheel bug is nothing to be picked up or toyed with. Its bite is extremely painful, may take weeks or months to heal, and may leave a permanent scar. In addition to feeding on pests, the wheel bug occasionally indulges in cannibalism; nymphs feed on each other, and females might devour males after mating. Again, not unlike some spiders.

As it’s rare to find a wheel bug even if you’re looking for one, it’s very unlikely that you’ll face an infestation. Still, avoid picking them up or touching them; the bite isn’t worth it. Like most insects, wheel bugs can be controlled with appropriate pesticides, doubly so, because an all-purpose insecticide will also eliminate their food source.