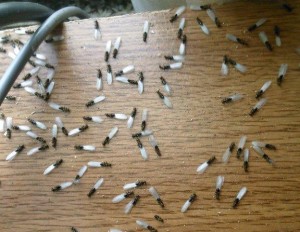 What lives in Japan, is about the size of a human thumb, and can spray flesh-melting poison? You guessed it – the Japanese Giant Hornet, which is capable of killing animals and humans alike, though this doesn’t happen all that often. About forty people die each year as a result of being stung; in any case, a sting from this hornet is extremely painful and requires hospitalization. In Japan, it is called the Giant Sparrow Bee, and it is actually considered a beneficial insect, because it feeds on agricultural pests. The good news is that it usually is not aggressive, and only stings a person when threatened – so leave it alone!

The Bullet Ant, so named because its sting is said to be as painful as a gunshot wound, is native to South America. The locals call it Hormiga Veinticuatro, or the 24-hour ant, because the pain of its sting lasts for about a day. They are used by the Satere-Mawe people of Brazil for initiation rites; unconscious ants are woven into a glove of leaves, with their stingers facing inward. A boy must then put his hand into the glove, and endure the stings for ten minutes without screaming. This results in temporary paralysis, and days of uncontrollable shaking – and then the boy has only to repeat the rite nineteen more times to become a man.

Also called the Goliath Bird-eater Spider, or the Goliath Bird-Eating Tarantula, this monster has a twelve-inch leg span, and lives in ground burrows in northern South America. Despite its terrifying appearance, its bite is relatively harmless to humans, though it might be as painful as a wasp sting. The Goliath Birdeater usually eats insects, but also consumes small vertebrates, including rodents, lizards, snakes, and – appropriately, considering the name – small birds. Females can live for as long as twenty-five years!

The Amazonian Giant Centipede is the largest centipede in the world, sometimes exceeding twelve inches in length. It feeds on rodents, lizards, bats, birds, and tarantulas, among other things. Its bite is painful, and usually causes severe swelling and a fever, but is not likely to be fatal to a human. Centipedes are arthropods, not insects, and this particular one is a favorite of collectors.