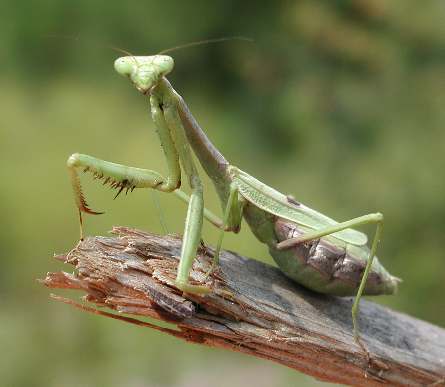 Most mantids are about three inches long, and range in color from light green to brown. When hunting, the front legs are held up as though the mantid is praying; in reality it is prepared to catch its prey and eat it alive. Female mantids lay a large number of eggs, which survive the winter months in a hard shell; in the spring, mantid nymphs emerge and begin eating everything in sight, including each other.

From time to time, customers will ask us to spare praying mantids if possible, and occasionally this request seems to be based on a religious superstitution. However, on a practical level, mantids feed on other insects, and for this reason are sometimes used as a form of “biological pest control.” They are not considered pests.

A mantis will eat anything it can catch, including small lizards, frogs, and rodents. The mantis lies in wait and lashes out suddenly when the prey is within range. Mantids are also cannibalistic, and will readily feed on one another.