The Mystery Of The German Cockroaches 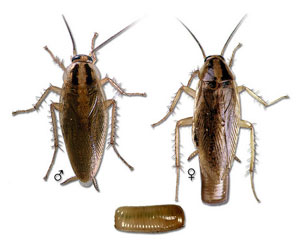 Pest management can, at times, be a mind-numbingly repetitive profession. Each day brings calls about ants in the kitchen, which are usually treated the same way. Mice in the garage, drug store beetles in an old box of pancake mix, clover mites on the windowsills — we tend to run into the same situations over and over. That’s why it can be startling — but also refreshing — when we are presented with a challenge that

It started a month or so ago. I went to a customer’s home to identify a mystery bug, which turned out to be a German cockroach. They had seen a couple of others, one indoors and one in the attached garage. This is the kind of roach that restaurant managers fear; Germans multiply rapidly and are so well adapted to human structures that they’re usually described as an indoor pest. They’re usually brought into a building — in a box, in a purse, in a bag. I explained all of this to the customer, and poked around a bit, looking for signs of an infestation. I didn’t find any. The house was relatively new and exceptionally clean. I could have sworn that there were no roaches, but for the one in the sandwich bag in front of me. Hmm. I placed several non-chemical monitors (sticky traps), treated the baseboards with an insecticide, and encouraged the homeowner to keep an eye on the traps and call us if they found any more roaches.

The call came a couple of weeks later. Another roach had been found. I poked around again, scratched my head, and treated the baseboards with a stronger insecticide. Use of a flusher in normal roach hot spots — under the refrigerator, behind the stove, under the dishwasher — accomplished nothing except to assure me that the kitchen wasn’t infested with roaches. Nor was any other room. They just weren’t there. Furthermore, all of the roaches spotted or caught were adults, indicating that they weren’t reproducing inside. It seemed like the adults were being brought in from outside, but in what? And by whom? I began to feel frustrated. Then, as I was talking to the homeowners on the front porch, we noticed a few dead bugs along its edge. I took a closer look and was surprised to find that they were dead German cockroaches. The plot thickened. Was the source outside? Or had the roaches moved outside? What was going on? I asked the homeowners, again, to keep an eye on the situation and call us if they found any more live roaches.

The third and final call came a couple of days ago. Another German had been found inside — and, the homeowner informed me, dozens had been found outside in a pile of lumber, about ten yards away from the house. Eureka! Although it’s still not clear how the roaches got there in the first place, it seems that the woodpile was the source of the problem all along. I assume that the handful of adults found their way into the house, possibly through the garage. With the weather getting colder, they probably wouldn’t have survived for much longer, but even so it’s one of those things that you just don’t see very often in the pest control business.

So, just to be clear, German cockroaches are primarily an indoor pest — but not always.