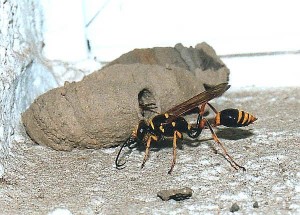 It’s not uncommon, at this time of year, to find small nests of dried mud on exterior walls, especially in the corners of porches. Most people are aware that they are wasp nests, and tend to be concerned about the possibility of getting stung. The nests are also considered to be unsightly.

The mud dauber wasp is about one inch long, and is named for the nests it molds out of mud. Other wasps build nests out of paper, or even burrow into the ground. There are different species of mud dauber, which build somewhat different nests, but the wasps themselves are very similar. They are solitary insects, meaning they don’t live together in colonies or groups, like ants and some bees.

Although adult mud daubers drink flower nectar, they hunt spiders and feed them to their offspring. Typically, it is the female who grabs a spider and stings it, paralyzing it, and then takes it to the nest. Eggs are layed on the unfortunate spider, which is then sealed into the nest. It is destined to become an all-you-can-eat buffet for the mud dauber larvae.

Despite their hunting habits, mud daubers are rarely aggressive and pose little threat to humans. Stings are very uncommon. Although wasps are susceptible to pesticides, removing their nests is usually sufficient control. Some people consider them to be beneficial, and don’t mind having them around, so long as they rebuild their nests elsewhere.