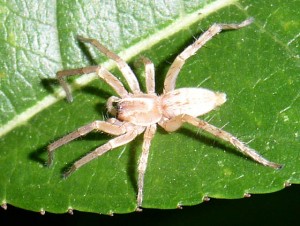 Here’s a ghostly pest, just in time for Halloween — but don’t worry, it’s no more scary than any other spider.

The ghost spider, which is one of many kinds of sac spiders, is common throughout North America. It is about 4-8 mm in size, has eight eyes arranged in two rows, and somewhat resembles the wolf spider.

It is also called the phantom spider, or buzzing spider. The latter name comes from the male’s habit of drumming its abdomen on a leaf to attract females, which makes a buzzing sound. Some time later, the female attaches an egg sac to a leaf, and guards it.

The ghost spider builds silken retreats (not webs, technically) between leaves, under rocks and pieces of wood, and in similar, out-of-the-way places. It feeds on a variety of insects. You might find some in a pile of firewood. Like most spiders in North America, the ghost spider is generally harmless, though a bite might leave a temporary mark.

Spiders are one of the many pests covered by our year-round Premium Protection Plan. Ghosts, on the other hand, are not.