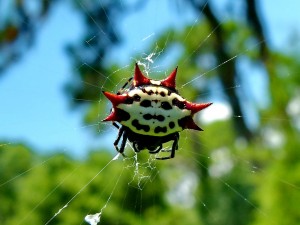 There are many species of spider on the Delmarva Peninsula, but the subject of this post is possibly the coolest-looking of them all — and oddly similar in appearance to another Delmarva critter (and delicacy), the crab.

Gasteracantha cancriformis is known by several nicknames, including star spider, spiny orbweaver, crab-like orbweaver, jewel box spider, and smiley face spider. Six spine-like projections on the abdomen cause it to look somewhat similar to a tiny, brightly colored crab. Females are 5-9 mm long and 10-13 mm wide, while males are much smaller.

The crab-like orbweaver is more common in the southern states, but we occasionally find them in our service area, usually near wooded areas. Its bite is generally harmless.

Despite its similar name, the crab-like orbweaver is quite different in appearance than the crab spider.