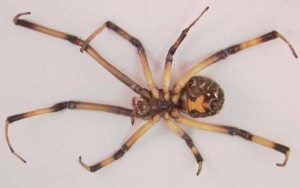 When I first heard about someone’s garage being full of dangerous brown widow spiders, I was skeptical. “Don’t you mean brown recluse?” I asked, assuming that the names of two venomous spiders, the brown recluse and black widow, had gotten mixed up. A few minutes of online research revealed that brown widows have been spreading throughout the U.S. since the 90's.

The brown widow spider is related to other widow spiders, including the notorious black widow. Ranging in color from tan to dark brown, it can be more difficult to identify than the shiny black widow with its distinctive red hourglass. The brown widow’s hourglass tends to be more difficult to recognize. Its legs look striped, with alternating light and dark sections.

Another sign to look for is its unusual egg sac. Those of most widow spiders are smooth and light-colored, but the brown widow’s is covered with pointed projections.

Although the brown widow’s venom is twice as strong as the black widow’s, it injects less of it when biting, therefore it is not nearly as dangerous. All widow spiders are non-aggressive in normal circumstances, and usually bite only when accidentally handled or touched.