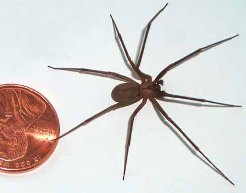 The brown recluse is also known as the violin spider because of its markings. Unlike most spiders, which have eight eyes, the brown recluse has only six, arranged in pairs, and its abdomen is covered with short hairs. The brown recluse spider builds webs in piles of firewood, garages, sheds, and other dry, dark areas. Usually, they are accidentally disturbed while doing yard work or moving things around that have been in place for a long time. When cleaning out an old garage or shed, it is best to wear gloves. Brown recluse spiders generally are not aggressive, and will flee when threatened, but will bite if touched suddenly.

Even then, most bites are minor, but some can cause severe problems, especially in young children. A bite will become painful, itchy, and swollen after a few hours, while its effects can include nausea, vomiting, and fever.

If bit, apply an ice pack to the bite to reduce swelling, as well as Aloe Vera cream or gel to soothe the pain, and seek medical attention.