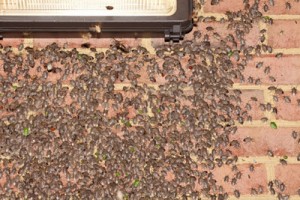 Experts have been warning us for a few years about the possibility of a stinkbug invasion, yet, so far, the Delmarva Peninsula hasn’t been hit nearly as hard as neighboring regions. But there’s still plenty of time for the Fall of 2013 to change that!

Throughout the Northeast and Mid-Atlantic, the brown marmorated stinkbug has become a major pest in the last decade, destroying crops and annoying homeowners. Agricultural impact aside, it becomes a nuisance pest in the fall when it enters structures in search of a warm, safe place to overwinter. They sometimes reappear during periods of warm weather during the winter, but typically don’t emerge until April or May, when they mate and deposit eggs.

The brown marmorated stinkbug is native to China, but was accidentally introduced into eastern Pennsylvania in the 1990s. From there, the shield-shaped insects rapidly spread to all of the Mid-Atlantic states, including Delaware and Maryland. They feed on orchards, crops, and gardens; stink bugs are known to feed on all kinds of fruit and vegetables, including apples, peaches, figs, soybeans, tomatoes, corn, lima beans, and green peppers.

Stinkbugs, though annoying and destructive, do not bite humans or animals. However, their terrible smell — for which they are named — is extremely unpleasant, and on rare occasions a stinkbug might spray a human’s eye, causing a burning sensation.

The best way to manage stinkbugs is to prevent them from entering your home in the first place. This strategy is called exclusion. Seal cracks around windows, doors, utility lines, etc., and repair or replace damaged screens. Attic vents are a favorite point of entry. Indoors, a vacuum cleaner is the most effective tool for control — but, once used, the cleaner will probably smell like stink bugs for a long time.

Stink bugs are covered by our year-round Premium Protection Plan, which protects your home for less than a dollar a day. For more information about any of our residential services, check out our website.