The Ant That Isn’t An Ant 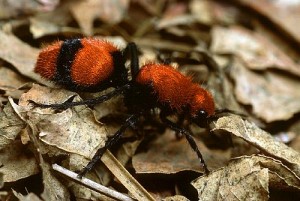 Every summer we receive questions about large, red, fuzzy, dangerous-looking ants. As anyone who steps on one quickly discovers, these unusual pests pack a powerful sting. But what are they? And what can be done about them?

For starters, they’re ants — but they’re not. They’re wasps.

That’s right. Red velvet ants are actually wingless female wasps of the Mutilladae family. About 3/4 inch long, and covered with red/orange hair, these solitary wasps are typically found in regions with sandy soil, between July and September. They are fairly common on the Delmarva Peninsula.

Unlike the females, the males have wings and can fly. Such a difference between the sexes of a species is known as sexual dimorphism. Another difference, perhaps more important to the average person, is that males cannot sting, but the female’s sting is so painful that velvet ants are sometimes called “cow killers.” But don’t worry, a sting isn’t going to kill you, or your cow, for that matter.

The good news is that velvet ants don’t intentionally invade structures, and don’t feed on wood or human food. They prefer nectar, and generally only sting when stepped on or accidentally touched. Like other solitary insects, velvet ants do not share a common nest or colony, but sometimes they can be found in large numbers in lawns and gardens.

Like practically every other pest, red velvet ants can be treated with pesticides, but the best way to prevent them from visiting your lawn in the first place is to eliminate sandy areas and plant thick grass.