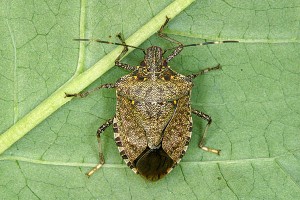 Spring is here — at least for the moment — and the recent warm weather has brought an unusual pest out of hiding in many neighborhoods. The brown marmorated stink bug originated in Asia, but appeared in Pennsylvania in the 1990s. Now it’s a significant pest in the Mid-Atlantic region, and seems to be becoming more prevalent on the Delmarva Peninsula. During the last couple of weeks, a number of our customers have reported finding stinkbugs in their homes. They aren’t harmful, but can be quite a nuisance.

Stink bugs are generally considered an autumn pest, but can reappear in the early spring after overwintering in a structure. Vinyl siding, attics, and even unused chimneys provide relatively warm shelter during the cold winter months. Now that they’re emerging, they can seem like they’re coming from nowhere, but in most cases the source of the problem is in the house itself. For this reason, a perimeter treatment might not be effective.

A bit of detective work might reveal the pests’ source. Where are they appearing? Is there a chimney, exhaust fan, or attic in that area? If there doesn’t seem to be any bugs outside, the source is probably inside, and an indoor treatment is needed. The good news is that stinkbugs don’t reproduce indoors, so the infestation will naturally improve as the adult bugs die off. If the source can be located, a pesticide application might be helpful, but some experts advise against this, as it can result in wall voids full of hundreds of dead bugs, which can attract other pests. Simply removing the bugs with a vacuum cleaner as they emerge is preferable.

The best way to prevent future infestations is to inspect the exterior of the home, identify holes and gaps that stink bugs can use to enter the home, and seal as many of them as possible. Attics, in particular, are more accessible than most homeowners suspect — eaves, vents, and old windows serve as open doors for a variety of pests. Caulk and screens are probably the most effective defense against the brown marmorated stinkbug.