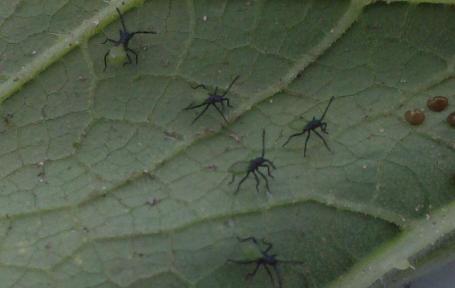 This photo of insects on the underside of a squash plant leaf were sent to Brasure’s Pest Control, Inc., by Scott in Berlin. Note the eggs on the right. What are they?

Appropriately enough, they are called squash bugs (pictured are squash bug nymphs). Squash bugs use their piercing-sucking mouth parts to feed on the sap of plants such as squash, pumpkin, and gourds. They generally begin to appear in late May and early June, and lay bronze-colored eggs in clusters of twelve to twenty, which hatch in about ten days.

Squash bugs are considered pests because their feeding can cause leaves to wilt, and can also result in yield loss. Sometimes, young plants die. Furthermore, squash bugs act as a vector for a bacterial disease known as Yellow Vine Decline, which affects melons and pumpkins.

To control squash bugs in a small garden, do your best to collect the individual bugs and crush the egg masses. If more than a few plants are infested (or in the case of a large garden and/or field of plants), an insecticide application will probably be necessary. Carbaryl, a general use pesticide (meaning it can be purchased by anyone, not just licensed exterminators), is very popular for home gardens—some might know it by the brand name Sevin—and has been proven to be effective in treating squash bug infestations.