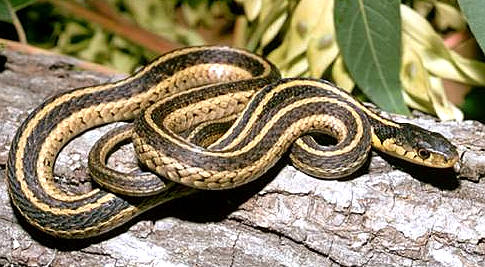 There are approximately 3,000 species of snakes in the world, ranging in length from four inches to a whopping thirty feet. Locally, the typical snake is about three feet long, though it’s not unusual to run into black snakes twice that long here on Delmarva.

Yes, copperheads are native to Delmarva, but don’t panic; they’re fairly rare. Unfortunately, there aren’t any pesticides labeled for snakes, but repellant products like Dr. T’s Snake-A-Way can be spread around the perimeter of a structure or lawn to discourage snakes from entering. Some homeowners use mothballs.

Most snakes are harmless (i.e., garter snakes, black snakes), and have round pupils. Venomous snakes, like copperheads, have elliptical eyes (think of a cat), triangular heads, and a small opening between the eyes and nostrils.

At this time of year, snakes are most likely to be found in cool, damp areas. Depending on the species and its needs, snakes might be found in and around stacks of firewood, old piles of lumber, mulch, shrubbery, crawlspace entrances, tall grass, gardens, cluttered basements, attics, garages, and sheds.

It can be difficult to locate a snake once it has entered a structure, so it’s best to prevent it from doing so in the first place. Seal or cover all holes, which will also prevent rodents from entering. Snakes feed on rodents, and are considered beneficial for this reason, so effective rodent control can double as snake control. On the flip side, an absence of rodents could be a sign that a snake is near.