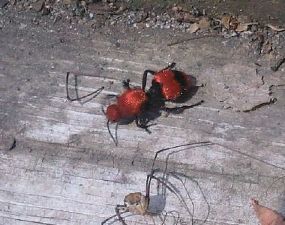 I have been finding large, fuzzy, red ants in my yard. They’re almost an inch long! What kind of ants are these? Should I be concerned?

Thank you for the email, Jim. It sounds like you’ve been running across what are commonly called “red velvet ants.” Their name is a bit deceptive, because they are not truly ants at all, but rather wingless female wasps of the Mutillidae family.

Red velvet ants are about 3/4 inch long, covered with dense red/orange hair, and are solitary (not social) wasps. Because they do not share a common nest, they can be more difficult to control than other species. Adults feed on nectar, and tend to be most active during the cooler hours of the day. Mutillidae are most common in regions with sandy soil, but are nonetheless a fairly uncommon sight.

The males of this family are not wingless, though they look similar. This difference between the sexes of a species is known as sexual dimorphism. Another difference worth noting is that males cannot sting, but females pack an extremely painful sting; so painful, in fact, that in some parts of the U.S. red velvet ants are called “cow killers,” though that’s a bit of an exaggeration.

It’s not surprising that you have been encountering them at this time of year. Red velvet ants are generally active between July and September. 2010 has been a dry year, and many lawns are dry and thin, exposing the sandy soil underneath.

Aside from their sting, red velvet ants pose no threat to humans or our homes. They do not infest structures (because they are solitary), and do not destroy wood. They are difficult to control with pesticides, but can be controlled somewhat by planting thick grass.