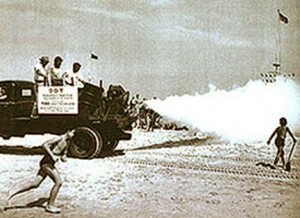 Many people have a negative reaction to the word “pesticide,” usually because of what they’ve heard about synthetic products that haven’t been used in 20-40 years. (Ironically, the same people sprinkle two potent pesticides on their food: salt and pepper, which have been used throughout history to control weeds and insects, respectively.) One might expect pest control technicians to frequently answer questions about insects and other pests, and they do, but the most common questions are those concerning pesticides: What are you spraying? Is this stuff safe for my kids/pets/plants? Will I get sick if I accidentally come in contact with it?

Forty years after the creation of the federal Environmental Protection Agency (EPA), Americans still have questions about the pesticides used in and around their homes. We hope to answer those questions as we continue this series, Pesticides 101. This week, we’ll take a look at several banned insecticides. How did they work? Why were they banned? Should they have been banned? Here are the facts.

Dichlorodiphenyltrichloroethane, or DDT, is arguably the best-known pesticide. Although it was first synthesized in 1874, it was not until 1939 that Swiss chemist Paul Muller discovered its insecticidal properties. The chemical killed quickly, opening sodium ion channels in an insect’s neurons, causing them to fire spontaneously. DDT was used, quite successfully, to control malaria during World War II, after which Muller was awarded the Nobel Prize in Physiology or Medicine. Concerns about the chemical’s effects on the environment and human health led to an EPA ban in 1972; today, DDT is classified as “moderately toxic” by the U.S. National Toxicology Program, and has been linked to a number of neurological and hormonal conditions in humans. However, it is still used in tropical countries to combat malaria, and some argue that it should be used in the U.S. to eradicate the exploding bed bug population.

It was the miracle pesticide. Chlordane, which was used from 1948 to 1988, killed everything. Agricultural pests, structural pests (including termites) — if it crawled, it died. An area treated with Chlordane might remain bug-free for years, as the chemical broke down very slowly. In response to concerns about its effects on the environment and human health, the EPA banned Chlordane for most uses in 1983. Use for termite control was permitted until 1988. Studies have linked the presence of Chlordane in human tissue to several kinds of cancer.

Diazinon, developed in 1952, was used in the 1970s to control insect pests, both indoors and outdoors. Unlike Chlordane, it breaks down fairly quickly, but can cause a variety of health problems for exposed humans, including headaches, blurred vision, tightness in the chest, nausea, and abdominal cramps. The sale of Diazinon for non-agricultural uses was prohibited in 2004, though consumers may possess and use products purchased before the ban went into effect.