Mystery Of The Hawaiian Wood Carving 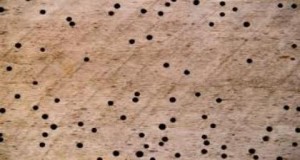 Sometimes, responding to a call about an unidentified bug can be a bit like solving a mystery. It can be hard enough to figure out where a particular pest is coming from, much less when the pest in question is nowhere to be found — or so similar in appearance to others (i.e., “little black bugs”) that there could be different explanations for what’s going on. Then it’s up to the exterminator to search for clues, and, hopefully, solve the mystery.

Recently I was called to a local home, where the perplexed homeowners explained that they had brought an ornamental woodcarving back from Hawaii in April. A few months later, tiny holes appeared in it, as well as tiny bugs. Since the carving had not had any bugs on it initially, they reasoned, the source of the problem must be in their home. They were concerned about possible termite activity.

An examination of the carving confirmed my suspicions. I had seen such tiny holes hundreds of times under old houses; they are created by wood-infesting beetles called powderpost beetles (named for their ability to turn wooden posts into fine powder). What’s more, the holes are not entry holes, but exit holes. Lyctids (or true powderpost beetles) are reddish brown to black, but have narrower bodies and distinct heads. Larvae bore into wood, where they slowly grow for up to four years, turning the wood into fine powder. That’s four years of ongoing, wood-destroying beetle activity, without any visible evidence!

The source of the problem, therefore, was not the home that the woodcarving had been brought into, but the carving itself. It had been infested all along, despite its outward beauty. The homeowners were relieved, though disappointed that they had bought an “expensive piece of firewood,” as they joked.