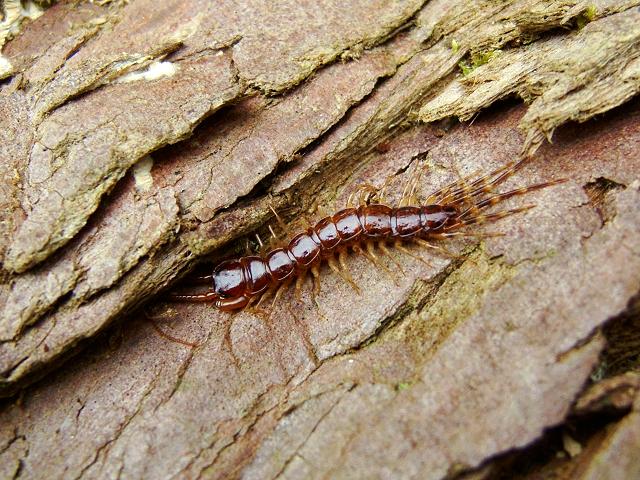 Spring has a way of drawing us out of our homes, into lawns and gardens, just looking for something to do out in the fresh air and warm sunlight. Perhaps you’re relocating leftover firewood, or cleaning out the flower beds, or preparing the garden. Sooner or later, you pick something up, and a many-legged bug scurries away; you’re both startled.

You’ve probably uncovered a centipede, which is an arthropod, not an insect. Depending on the species, it could have anywhere from twenty legs to hundreds, but the centipedes on Delmarva are usually rather small, one to four inches in length. Regardless of species, each individual always has an odd number of pairs of legs. One might have fifteen pairs of legs, for a total of thirty, but will never have an even number of pairs of legs, except in the case of a mutation.

Centipedes are a mixture of brown and red, and can be found anywhere from rainforests to dry deserts. Locally, they are usually found in wooded areas, sometimes inhabiting soil, leaf litter, and dead trees. Most species are nocturnal, and do not see well; many do not have eyes at all, and rely on sensory antennae to find their way. They are predators, and will eat just about any soft-bodied invertebrate that they can get their sharp claws on, though they will also feed on plant matter when there is no other food available.

Smaller centipedes are usually unable to bite through human skin, but in other countries, bites from larger species can be dangerous to small children and adults who are allergic to bee stings and spider bites. The largest centipede in the world is the Amazonian giant centipede, which reaches about one foot in length, but the extinct Euphoberia could reach up to one meter, or 39 inches, in length!