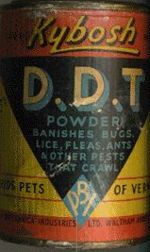 In 1939, Dr. Paul Muller discovered that DDT killed a number of insects (including mosquitoes), and patented it in the U.S. in 1943.

Dr. Paul Muller was awarded the Nobel Prize in 1948 “for his discovery of the high efficiency of DDT as a contact poison against several arthropods.”

Bed bugs were almost entirely eliminated in the 1940s and 1950s due to the use of DDT.

By 1967, malaria had been eradicated from most developed nations through the use of DDT.

People began to reconsider the benefits of DDT after Rachel Carson published Silent Spring in 1962. However, the book was essentially a work of selective reporting which misrepresented the results of experiments that involved exposing quail and pheasants to the pesticide. Among other things, Carson claimed that DDT threatened wild bird populations, and could cause cancer in humans.

During the years that DDT was in use, bald eagle populations increased. Opponents of the pesticide’s use erroneously claimed the opposite.

When Sri Lanka banned DDT use in the mid-1960s, the number of malaria cases rose from twenty-nine in 1964 to more than half a million five years later.

In 1971-72, the Environmental Protection Agency (EPA) held hearings on DDT. Concluded Judge Edward Sweeney, “DDT is not a carcinogenic hazard to man…DDT is not a mutagenic or teratogenic hazard to man…The use of DDT under the regulations involved here do not have a deleterious effect on freshwater fish, estuarine organisms, wild birds or other wildlife.”

Many people believe that DDT was banned because it causes cancer, but this has never actually been proven. In fact, numerous experiments have found that human subjects exposed to heavy doses of DDT (in one case, on a daily basis for two years) suffer no ill effects.

DDT is still used in the Third World (particularly in Africa) to combat malaria.

Now that incidences of bed bug infestations are on the rise, some scientists argue that the problem, which is growing worse every year, is a result of our departure from DDT use more than three decades ago.