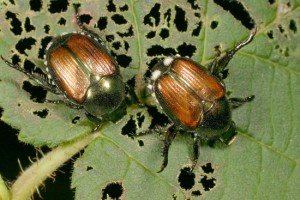 Last week I asked our Facebook friends to suggest topics for this month’s blog post. The first response: Japanese beetles. Good one! We talk about ants, spiders, roaches, and bed bugs all the time, but have never posted an article about Japanese beetles, which wouldn’t generally infest a home but can become a serious pest in the garden and in landscaped areas. This seems to be the peak of Japanese beetle season on Delmarva. These pests were first encountered in the U.S. in 1916.

You’ve probably seen Japanese beetles, even if you didn’t know what they were. They’re about 7/16 inch long and are easily identified by their distinctive, metallic, green and copper coloring. Young adults emerge from the ground in June and begin devouring plants. Lots of plants. In fact, they feed on about 300 different species of plants. The hungry beetles tend to congregate in groups and gorge on one plant at a time, and are considered a serious pest of crops and ornamental plants.

The good news is that Japanese beetles only live for about thirty to forty-five days. Most of them will be gone by early August. By then, females will have burrowed into the soil to lay eggs. The next generation of larvae — or grubs — will become a pest of a different sort by late summer, feeding on roots. They’ll spend the winter underground, and reappear next spring.

Japanese beetles can be controlled with many insecticides, including Sevin dust. An application typically offers a couple of weeks of protection. Organic gardeners may prefer to remove the beetles by hand and drop them into a bucket of soapy water. There are also Japanese beetle traps, which use baits, but some research suggests that the traps attract more beetles than they catch.