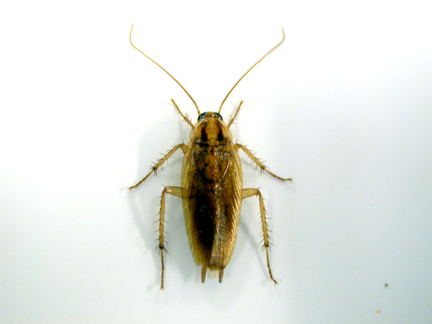 There are approximately 4,500 species of cockroaches in the world. In our service area, we typically deal with five of them: the German, Oriental, American, Brown-banded, and Pennsylvania wood roach. Each has different characteristics and requires different control methods, but today we’re going to briefly look at the most notorious roach, the one feared and despised by restaurant managers, the German.

But German cockroaches aren’t just the scourge of the restaurant industry; they’re also the most common roach species found in homes, apartments, and hotels. This is partly due to their relatively small size — adults are 1/2 to 5/8 inch long — so that they’re able to squeeze into tiny cracks and crevices, and their ability to multiply rapidly. One pair can indirectly produce 10,000 descendants in just one year.

Germans are tan to light brown in color, and adults have wings, though they don’t fly (unlike Pennsylvania wood roaches). They are easily identified by the two dark lines on the back of the head. Other species are larger, and range in color from tan to dark brown or black.

They prefer warm, moist environments, and will eat practically anything, including sweets, starches, and grease. It makes perfect sense, then, for them to infest kitchen appliances, such as stoves and refrigerators, though severe infestations might extend to the rest of the building. Like many other pests, they’re most active at night. When they’re in plain sight during the day, that’s usually a sign of a severe infestation.

Roaches are covered by our Year-Round Premium Protection Plan, but we also offer one-time treatments. For more information, call our office at 302-436-8140.