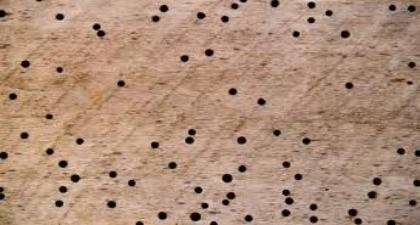 When we use the term wood-destroying insects, most people think of termites immediately. After a moment of thought, some might remember carpenter ants and carpenter bees. But did you know that there are several species of wood-infesting beetles that can cause just as much damage to a home as a hungry termite colony?

Many years ago, people who sat up late with a sick relative sometimes heard a light tapping sound, which they said was death knocking at the door. It was actually the mating call of Anobiids, which were appropriately named Deathwatch Beetles. They are cylindrical, and reddish brown to black in color. Females lay eggs in cracks or holes in hard or soft wood; the larvae then bore into the wood and follow its grain, eating and digesting cellulose. After pupation, adults chew their way out of the wood, leaving behind small holes. Sometimes females lay eggs in these holes, reinfesting the wood. This process takes 1-3 years, on average.

Like Anobiids, Lyctids are reddish brown to black, but have narrower bodies and distinct heads. Unlike Anobiids, they cannot digest cellulose, but feed on the starch, sugar, and protein content of sapwood. Preferred woods include oak, hickory, and ash. In addition to damaging beams in a crawlspace or basement, Lyctids often damage hardwood floors. Their behavior is similar to that of other wood-infesting beetles; depending on the condition of the wood, their life cycle can be about four years. (That’s four years of wood being destroyed without any visible evidence.)

Bostrichids tend to infest the dead and dying branches of softwood and hardwood trees. Like Lyctids, they cannot digest cellulose, but digest the starch, sugar, and protein found in wood. Development takes 1-5 years.

Ironically, Old House Borer beetles prefer wood less than ten years old. They are large, up to an inch long, and dark brown to black in color. Females lay eggs in cracks and holes in softwoods, such as pine, spruce, fir, and hemlock. Development takes at least two years, but can take more than twenty! Homeowners might hear the rasping, ticking sound of their feeding. Unlike other wood-infesting beetles, Old House Borer larvae chew exit holes, then plug the holes with frass before pupation. Exit holes are fairly large, about 3/8 inch in diameter. Females typically reinfest the wood they emerged from.

The good news is that wood-infesting beetles do not destroy wood nearly as quickly as termites, so there is no need to rush and treat a structure if uncertain about the infestation. It can be difficult to determine whether the beetles are active or not, as they are rarely seen, and exit holes are only an indication of past activity. Some inspectors use stethoscopes to listen for feeding larvae. In either case, it might be necessary to: