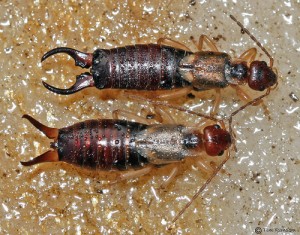 We don’t run into earwigs very often, but when we do, people have a lot of questions. These unusual insects are about 5/8 inch long, brown in color with reddish heads. They are easily identified by their large pincers, located on the end of the abdomen. The nickname “earwig” probably comes from an old wives’ tale which claims that a female will bore into a sleeping person’s ear and lay its eggs there. There’s no truth to this superstition, though it is possible for an earwig, like any other tiny critter, to crawl into a human ear.

In the United States, earwigs are most common in the South and Southwest. They’re usually found in damp areas; under piles of leaves, mulch, compost, old wood, etc. I once found a dozen or so in a wet cabinet in a local bar. They enter structures by accident while seeking shelter, especially during dry weather or the early fall. Indoors, they’re often found near sinks. Earwigs do not cause damage to household items, but are considered a nuisance pest.

Earwigs are omnivorous, meaning they can eat other insects as well as plants and fruit.

An earwig treatment might involve the treating of baseboards and cracks and crevices with appropriate insecticides, though this will not prevent the insects from coming in. It’s usually more effective to eliminate outdoor harborage, and prevent them from entering the structure. Pay special attention to damp areas around the house, and seal cracks that could provide access.