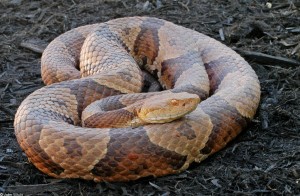 Visitors to the Delmarva Peninsula are often surprised to learn that it is home to copperhead snakes, having erroneously assumed that they are only found in the South. But copperheads can be found throughout Delaware, Maryland, and Virginia — the three states which make up the peninsula — as well as in Pennsylvania and New England. As a young boy playing outside and helping out in the garden, I was taught to identify and avoid this venomous viper.

Copperheads are 24 to 40 inches long, with tan and brown crossbands. Like other pit vipers, they have triangular heads and elliptical pupils (think of a cat’s eyes). Some people say that the top of the head is the color of a penny, hence the name copperhead. Locally, garter snakes, with their similar coloring, are sometimes mistakenly identified as copperheads by people who have only heard them described, though they actually look quite different.

Copperheads eat a variety of small animals, including frogs, birds, other snakes, and insects, but typically avoid humans. They would much rather slither away than bite when disturbed, if possible, but will bite when threatened, harassed, or accidentally touched. Contrary to popular belief, copperhead bites are rarely fatal, though they are very painful and can cause scarring. If bit, you should seek medical attention immediately.