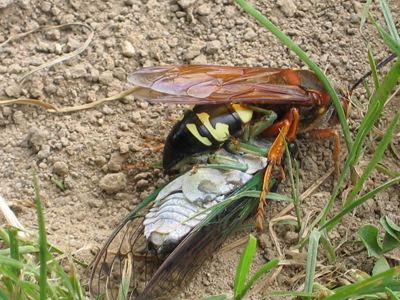 Each summer we’re asked about lawns being marred by numerous sandy hills. Sometimes they’re thought to be anthills, though most people connect them to what seem to be large bees or hornets buzzing around nearby. If this sounds familiar, there’s a good chance that you’re being visited by cicada killer wasps.

At 2/3 inch to 2 inches long, cicada killers are larger than most other wasps and hornets, and scare homeowners for that reason. They’re sometimes called sand hornets, though they aren’t hornets. They hunt cicadas and give them to their young for food. Adults, however, feed on flower nectar and plant sap.

Cicada killers burrow in sandy soil with sparse vegetation; Delmarva’s sandy soil and hot summers are perfect for them. Unlike yellowjackets or paper wasps, which are social insects, cicada killers are solitary wasps. Individuals dig their own burrows and rarely share, so that a lawn with thin grass might suddenly become home to a hundred hills of sand, each with wasp-sized hole at its peak. Homeowners worry about walking through the inhabited area, and, of course, are annoyed by the temporary damage to the lawn.

Only female cicada killers can sting, but rarely do. Males are extremely territorial, and frighten people at times, but pose no danger. Females usually use their stingers to paralyze cicadas, but will sting a human if stepped on or grabbed.