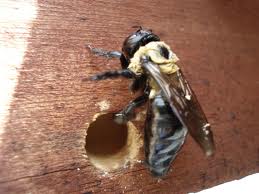 As a young boy, I was always slightly afraid of the old sheds on the property during the summer, because each was guarded by several large, buzzing bees. Sometimes I would dash in and dash out. Other times I would linger outside, eyeing the hovering bees nervously, certain that taking another step would earn me a nasty sting. I was familiar with the sting of the smaller honey bee, and reasoned that a sting from one of these big boys would be a doozy.

As I later learned, my fears were unfounded. Carpenter bees — for that’s what they were — are mostly harmless. Males don’t have stingers, and females only sting when threatened (i.e., grabbed or stepped on).

Carpenter bees look very similar to bumblebees, being black and yellow and about the size of a human thumb, but have distinctive black, shiny abdomens. Unlike honey bees and bumblebees, they are solitary bees, which means they don’t nest together. They excavate tunnels in wood (unlike termites, they don’t eat the wood), and though several bees might share a single entrance hole, the concealed tunnel branches into additional tunnels. They spend the winter in old tunnels, and emerge in the spring. In the past week, I’ve noticed several buzzing around wooden decks and old sheds.

Although carpenter bees are wood-destroying insects, the damage they cause is typically minor. Of course, even minor damage can become major after many years — plus other wood-destroying pests, like carpenter ants, might take advantage of the bees’ tunnels and cause more damage. However, it’s difficult to prevent new damage; because carpenter bees don’t eat the wood they’re excavating, treating it with an insecticide might not kill them. We recommend treating individual entrance holes with an insecticide dust, like Ficam or Sevin.