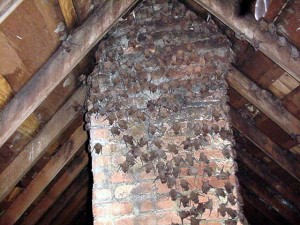 Contrary to popular belief, bats are related to neither rodents nor birds. They’re mammals of the order Chiroptera, and their webbed wings make them the only mammals able to fly. (Flying squirrels can only glide for short distances.)

North American bats are insectivorous, feeding primarily on flying insects as they hunt at night. A colony of bats can consume a substantial quantity of insect pests (including mosquitoes, moths, and beetles) in a single night. How can bats see at night? They can’t — at least not with their eyes. Bats emit high-frequency sounds, too high for the human ear to hear, to communicate, avoid obstacles, and locate prey. This is known as echolocation.

It’s much easier to prevent bats from entering a structure than it is to find and remove them once they’re inside. Bats often enter buildings through chimneys, attic vents, open windows, and eaves. Though different species differ in size, some of the smallest bats are able to squeeze through a hole the size of a dime!

Bat roosts are easiest found during the day in warm weather. If disturbed, the resting bats can quickly disappear into nearby cracks and crevices. To avoid killing young bats unnecessarily, bats should be removed between August and May by a professional.

Occasional bat intruders, which enter human structures accidentally, usually find their way out if allowed. Lights should be dimmed, otherwise the bat may become confused and hide. Healthy bats do not attack humans. If the bat cannot find its way out through an open window or door, carefully capture it with a small net and transport it to the outdoors.