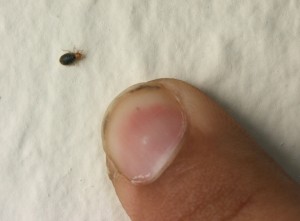 In our last post we debunked five common myths about bed bugs, but those are far from the only misconceptions about the frequently misunderstood pest. Here are five more myths we frequently run into, plus the facts.

Biting pests like mosquitoes and ticks can transmit diseases, so it’s somewhat logical to expect bed bugs to do the same — but, so far, there is no evidence that they do. It just doesn’t seem to happen.

This is simply false. Bed bugs don’t have wings, and can’t fly. If they could, we’d really be in trouble.

“Bed bugs can only be killed with a heat treatment.”

The pest control industry is still learning about bed bugs, and experimenting with different treatments, so it’s to be expected that there will be disagreements about the most effective treatment. Unfortunately, some companies go a step further and insist that their competitors’ treatment methods are ineffective. While it’s true that heat treatments can be highly effective when done properly, other treatments involving insecticides, steam, and/or cold can also be effective.

“Bed bugs won’t bite if you leave a light on.”

This myth is based on the fact that bed bugs are nocturnal, but that doesn’t mean they’ll skip meals just because a light is on. They’ll feed whenever they need to, regardless of the time of day.

“The bed bug problem isn’t as bad as it was a few years ago.”

Quite the opposite. There are more bed bug infestations today than ever before in recent history, and the infestations are being discovered in less obvious places: Buses, libraries, etc. However, there seems to be less media coverage, leading people to believe that the problem they first heard about a few years ago has been solved.